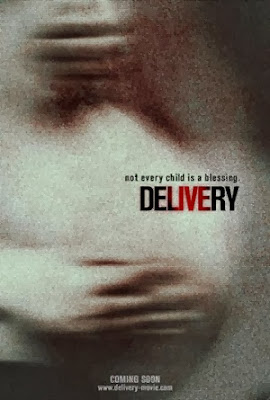 On the second day of Mayhem, my first screening was the highly anticipated Strange Colour of Your Body's Tears, directed by French duo Helene Cattet and Bruno Forzani and garnering rave reviews at London Film Festival. A review for LeftLion Nottingham is forthwith, so I won't say too much here. What I can say is that the film is one of the most radically styled, daring, and maddening films of the year. By turns ornamental and grotesque, it is dazzlingly unique and psychedelic. Just don't expect to figure out what's going on.


Delivery (2013, Dir. Brian Netto), centres around a young couple, Rachel and Kyle Massy, who are expecting their first child on national television, for a reality TV show. Purported to be assembled from the unused footage from that show, the producers abandon their original intent when strange, demonic hauntings begin to find a focal point around Rachel's pregnancy. She becomes convinced that something supernatural has latched itself onto her unborn child, and the found footage aspect plays out accordingly. Animals grow frightened and aggressive in her presence; unexpected noises and voices are picked up on sound recording equipment; Rachel grows taciturn and silent. This is all reasonably well done, particularly the opening section; Netto captures the tacky, cheerfully glossy glow of "lifestyle" TV, setting his couple up to watch them fall, so to speak. Unfortunately, it remains largely rote and paint-by-numbers through most of its running time. Certain portions are harrowing, but the saving grace of the film is its final note of ambiguity - has a demonic force torn its way through these ordinary lives, leaving tragedy in its wake? Or has a mentally ill young woman, wracked with primal terror at her body's vast changes, been exploited by a craven reality TV show? This sole complexity lends a final depth to the film that had otherwise remained an entertaining, if derivative, take on the found footage sub-genre.